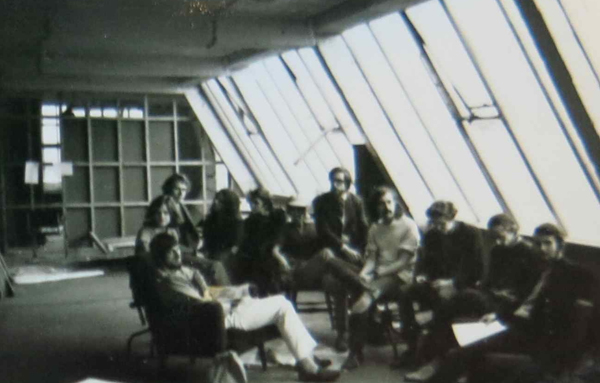 The Arts Lab was a short-lived experimental cultural space, set up in 1967 in London’s Covent Garden by American Jim Haynes. Haynes came to the United Kingdom in 1956 as part of the US military, but soon settled in Scotland, establishing the Traverse Theatre. In 1966, Haynes set up the London Traverse at the Cochrane Theatre before turning his attention to an experimental mixed-media space, the Arts Lab.

Operating a gallery, theatre, cinema, café and discussion space, the Arts Lab was the first ‘process space’ of its kind in the UK. It was the forerunner, or facilitator, for organisations key to London’s cultural development like the London Filmmakers’ Co-operative production wing[1] and provided a model for future Arts Labs to follow around the UK. The Arts Lab was used as a space to experiment with new ideas and art works, empowering audiences and participants.

A Lab is an ‘energy centre’ where anything can happen depending upon the needs of the people running each individual Lab and the characteristics of the building.

A Lab is a non-institution. It’s boundaries should be limitless.

Within each Lab the space should be used in a loose, fluid multi-purpose way.

Anyone who is interested in changing anyone’s attitude to anything is committing a political act. We at the Covent Garden Lab have certain philosophic attitudes to the world, and we hope to show others by word and deed that these political/philosophical attitudes can be transmitted via non-traditional political media. Every person is a medium; use it carefully!

[1] An initiative led by the second generation of co-op members, who included Malcolm Le Grice and David Curtis, began in 1967/8 to push for a production wing of the LFMC. At this time it was felt that the overriding dominance of American avant-garde film was far less than equally matched by domestic production. This prompted Le Grice to help build the developing and printing equipment which was first used at the New Arts Lab. http://www.luxonline.org.uk/histories/1960-1969/london_film-makers_co-op.html